It’s true, the weather outside is not yet frightful. That doesn’t mean that folks across the Northwoods aren’t ready for all the things that make the holidays so delightful though: family, fellowship, food – and music.

It’s ironic that an area that celebrates every summer day like it might be the last would find so much joy in the darkest and sometimes coldest time of the year. After a year unlike any other in generations, though, many are doubly excited to mark the end of the year and embrace the comfort of tried-and-true traditions.

These traditions of the past might have seemed to some a little staid or even archaic in a ‘normal’ year. Headed into our 20th month of the COVID pandemic, many now see these holiday traditions as a welcome piece of continuity in a world without precedent. 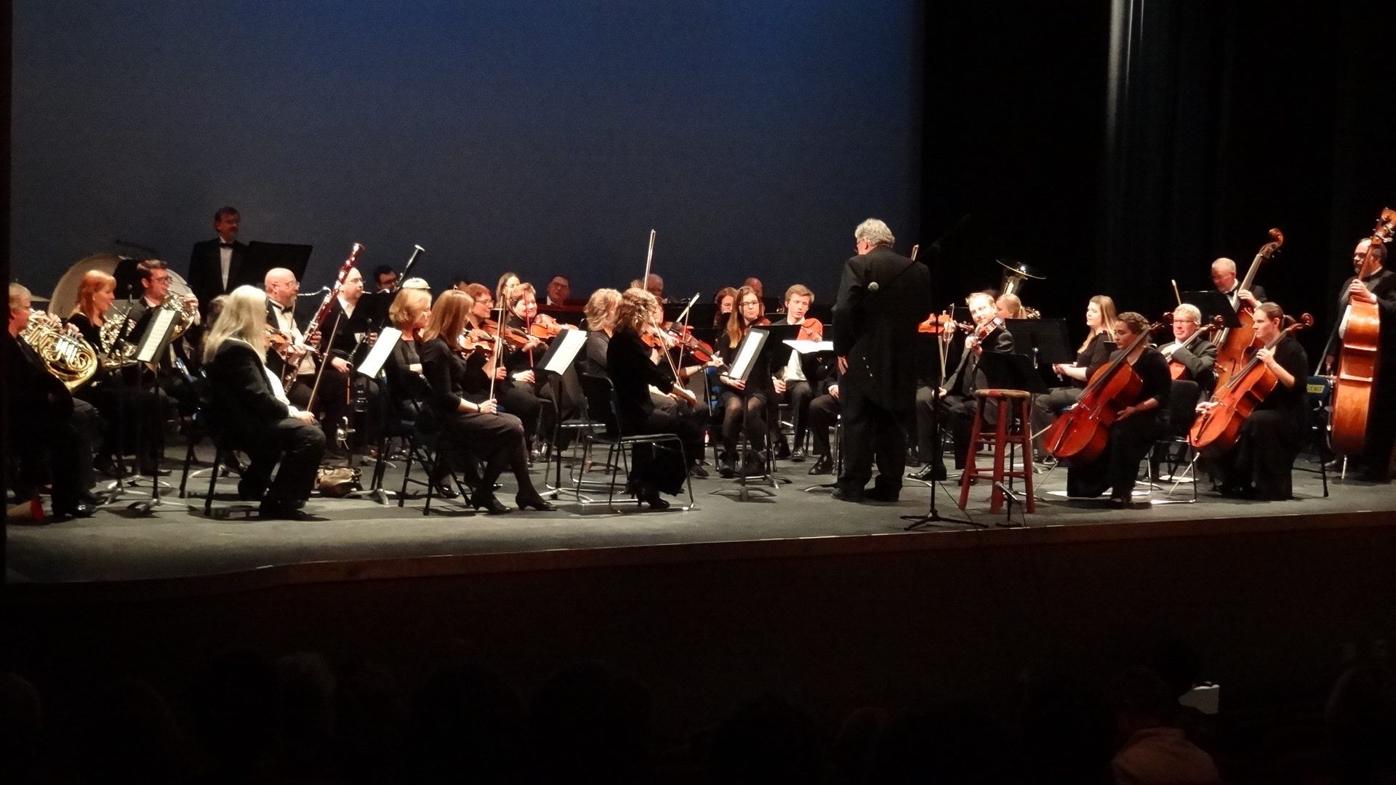 Typically, the Itasca Symphony Orchestra performs their first concert of the season in mid-November, right after Veteran’s Day. A conscious decision was made to push a concert out until December to incorporate a fun holiday repertoire.

The original plan was also to perform with the Grand Rapids Area Male Chorus and the Itasca Community Chorus, but a decision was made in September that the confines of the Reif Center stage and the multiple musicians singing their hearts out might be taking an unnecessary risk. That collaboration will still happen, but at a future date.

However, this concert still serves as a milestone, being the first time that the talented brass and woodwinds will perform alongside the strings since February of 2020. Nationwide there was concern how wind instruments, using the lung capacity of players to make music, might contribute to COVID risk.

With that risk in mind, the symphony moved forward for a November 2020 chamber orchestra concert that was strictly virtual – and it can still be enjoyed on the IOSP YouTube page. The February 2021 concert morphed into a virtual field trip event for youth in conjunction with the Reif – with a performance of Peter and the Wolf. Finally, May of 2021 saw the first live performance in over a year – with strings and piano soloist Alex Sandor. That performance is also available on the IOSP YouTube page.

“It’s been a tough balancing act,” says IOSP Executive Director Tammy Mattonen. Our musicians are anxious to participate and share their love of music, but the last thing we want to do is have that love of music make a performer or audience member sick.”

With spacing, masks and testing the Symphony is doing all it can to play safe.

The audience can expect to hear classics like ‘White Christmas’ and ‘Sleigh Ride’ (yes, complete with the sleighbells and iconic whip) along with three additional holiday medleys very much in the ‘Boston Pops’ tradition. Indeed, Leroy Anderson’s ‘Christmas Festival’ was written for and first performed by the Boston Pops 71 years ago in 1950.

Another medley is ‘Christmas at the Movies’ with themes from the Polar Express, How the Grinch Stole Christmas, Miracle on 34th Street, Home Alone and even the theme from Tim Burton’s Nightmare Before Christmas.

The concert isn’t all pops though. The second piece of the performance will be Mozart’s ‘Sleigh Ride’ from his suite of Three German Dances. The concert also features viola soloist Pedro Oviedo playing the movements ‘Prelude’, ‘Carol’ and ‘Christmas Dance’ from English Composer Ralph Vaughn Williams’s Suite for Viola and Orchestra. Written in 1934 after the death of Williams’s friends and contemporaries Edward Elgar and Gustav Holst, it is as soulful and deeply moving as the pops pieces are lively and finger-snapping.

Come deck the halls of the Reif Center with holiday hope and cheer Saturday, Dec. 4 at 7 p.m. Celebrate local music and ‘the most wonderful time of the year!

When you hear about an upcoming performance of the Itasca Symphony Orchestra, you might expect to read about Bach, Beethoven or Brahms.

Bowie, Beck and Brittney Spears… well, not so much.

In a wide departure from the standard symphonic repertoire, the Symphony will be performing 16 pop songs spanning four decades with the Twin Cities-based jazz-pop-rock trio The New Standards.

Pianist Chan Poling, bassist John Munson and vibraphonist Steve Roehm got together as a side project back in 2005. Poling is one of the founders of the iconic Minneapolis new-wave band The Suburbs while Munson was bassist for the chart-topping group Semisonic. Roehm, the most classically trained of the three, played percussion while studying and living in Texas with the punk outfit Billygoat and the avant-jazz Electropolis.

All three are fans of great songwriting. Sensing a lack of an interesting jazz trio repertoire beyond the usual “old standards,” they originally got together to play and sing their favorite songs – from every era, particularly post 1960s pop music – in a stripped-down acoustic setting. They make room for solos and arrangements with the freedom of jazz, yet never fully abandon the soul of pop and rock.

The genesis for this orchestral project came from the Minnesota Orchestra several years ago. The trio had not only become well known for reimagining rock and pop songs as “new standards” with a jazz trio touch, but also for their insanely popular sold-out holiday shows at the State Theatre, featuring a six-piece horn section, string quartet and harp.

The Minnesota Orchestra was actively looking to engage new, younger audiences with music that incorporated instruments of the symphony with tunes and stories that were relevant to audiences that didn’t necessarily connect to Beethoven or Mozart.

At the same time, The New Standards had a repertoire of songs that they had been looking to take to a new level of interpretation as well.

“We jumped at the opportunity,” recalls bassist John Munson. The next step was orchestration.

In 2015, Chan Poling, pianist for The New Standards, had created the music and lyrics for the musical “Glensheen” about the infamous 1977 Congdon murders at Glensheen Mansion in Duluth.

The musical, which debuted in the fall of 2015, was met with rave reviews. Much credit was given to Minnesota composer and arranger Robert Elhai, who brought Poling’s lyrics and tunes to life in a way that audiences could connect to.

Elhai was nominated for a Tony for his orchestration of the Broadway hit “The Lion King” in 1998 and has had a hand in orchestrating music for over 150 different Hollywood flicks, including “Aliens,” “Iron Man,” “Pirates of the Caribbean” and “Fast and the Furious.”

When the Minnesota Orchestra came knocking, The New Standards knew they had an ace up their sleeve with Elhai.

“We had a lot of ideas,” explains Munson, “but we really needed help putting ‘pen to paper’ to achieve the sound we wanted.” Elhai delivered.

The result was a show unlike anything ever played at Orchestra Hall in downtown Minneapolis.

Not only was there a cocktail lounge on stage, but conductor Sarah Hicks was enjoying a drink just a few songs in!

Beyond the unique set up, the most noticeable departure from the norm was the range of music performed. This wasn’t your Boston Pops kind of performance. Music from groups like New Order, The Clash, Talking Heads, Elvis Costello and even Outkast were being played with a full orchestra – one consistently ranked as one of the top 10 in the United States.

After that concert almost three years ago, the band knew they wanted to keep their creation alive. With potential grant funding available from the Minnesota State Arts Board, The New Standards set out to bring their music to Greater Minnesota… and Grand Rapids was on their list.

“They called us,” tells former ISO Executive Director Tara Makinen. “I think that speaks pretty strongly about what having a top-notch, community-supported arts venue like the Reif can do to expand artistic opportunities for our area.”

It wasn’t a done deal, though. The State Arts Board still needed to review applications and evaluate. The ISO, an organization in good standing with the Arts Board who themselves had submitted grants and vetted themselves up for the rigorous grant selection process in the past, was a major factor in getting the final approval to make this collaboration happen.

Thanks to community investment, good oversight and a lucky opportunity, the community can hear music written by some of the most popular artists of the last several decades, re-interpreted by some of Minnesota’s most innovative musicians and a world-renowned composer/orchestrator – with an orchestra full of local musicians.

This is a perfect example of how investment of time and treasure into maintaining a vibrant arts culture pays off for the Greater Itasca Community.

Whether you prefer Tchaikovsky or the Talking Heads, Prince or Puccini, this is a concert that the community shouldn’t miss. It’s Minnesota at its most innovative – and inclusive.

Experience the confluence of rock, pop, jazz, orchestral harmony and Minnesota irreverence next Saturday, May 11 at the Reif Performing Arts Center at 7:30 p.m. Read more about the individual songs in the next edition of the Herald-Review on Wednesday.

About the Author: Tammy Mattonen